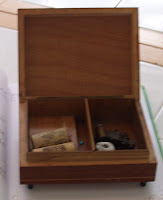 A monkish little man with a perfectly round head and yellow body was banging a xylophone inside a wooden box, or so I imagined it as I lay there, eyes closed. The music box that was putting me to sleep played two phrases of “La Vie En Rose” in a fashion so regular and so clearly too fast that now it seems comical: "And then we kiss and then we fall in love or vice versa and I see the world through rose-colored glasses and we do it all again until the crank runs out--See you tomorrow." It was good luck if the music stopped exactly at the end of the song.

It was just a plain wooden box that played music. It sat on the corner of my dad's dresser, on the marbled surface near his collection of change, index cards from his front pocket, and a photo cube.  He had one music box, and I eventually had a collection of twenty or so ornate and highly breakable ones, yet his was particularly special. For one thing, it could rightfully lay claim to the term "music box," unlike so many snow globes that play music but are not boxes at all.

I could expect to receive music boxes for Christmas and birthdays and anytime my mom’s friend Aunt Sue went somewhere exotic. We lived in Maine. My miniature musical universe included a Chinese pagoda, an Indian elephant, Pinocchio-like wooden villagers dancing in a circle, and a country farmhouse whose roof opened up to let the music out. Ice-skating ceramic penguins, propelled by the unwinding tune, raced around on a reflective, magnetic lake flanked by Christmas trees.

In the beginning, the music boxes just held air. And music. When my family moved to Kentucky, memories formed in them, seemed to come out of them. About that time, I, like Aunt Sue, began to travel: France, Ohio, Boston, New York. At some later point, home became a place to travel to.

"Somewhere Over the Rainbow" is slowing down, but the Chinese pagoda is going full tilt, competing, in the musical building category, with the farmhouse, playing "Oh, What A Beautiful Morning." I replace the Emerald City and pick up "Swan Lake," smoothly wiping its globe with the Pledge-sprayed "softy," which then threatens to get caught in the ceramic roses around the globe's base. Then I put it back on the mantel with the others. I dust and listen to my music boxes at the end of every visit home, a ritual that is both a preparation to leave and an appreciation of where I am and have been.

s a maroon wooden box decorated with a picture of Victorian children in love. It plays "I Just Called To Say I Love You." The children, painted in some kind of lacquer that changes in the light, hold bouquets of holly and share an umbrella in the glinting snow. "I just called (dee dee dee dee) to say (bom dee dee dee dee) I love you (do-de dee dee dee dee dee dee dum de-do)." The first phrase is like a series of mounting questions that the second phrase--"And I mean it from the bottom of my heart"--resolves, finishing with a nice arpeggio..

Music boxes are time capsules of childhood. By twisting the crank and opening a music box, I transport myself back to a time when nice things seemed to appear in my life by chance. A music box collection! The music boxes are still there on my mantel, waiting for me, ready to tinkle out love songs at my behest. At the same time as they evoke youth and innocence, they also contain--and always have contained--a certain foreboding and suggestion of the end.

The music slows as the crank unwinds, and as it slows, it saddens. What is bouncy and cheerful, almost over-caffeinated, when the music box has just been cranked becomes wistful when it is about to stop. The call will be cut off, and you don’t know when. It may end on any of those question marks. It is creaking out one note at a time. The notes have lost their rhythm. You start to wonder, “Was that the last one?” You hold your breath.

You never know when something real and dear will become a memory.
Posted by Katie Crenshaw at 3:46 PM