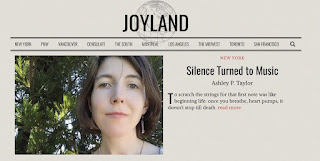 Joyland magazine has published my story, "Silence Turned to Music"!

This is a piece I began writing in the summer of 2012, inspired by Bach's Chaconne from the Partita in D minor for solo violin. I had begun writing about the Chaconne as nonfiction long before that, however. I'd written an essay about the Chaconne for my blog, The Bach Season, which even my mom--my number one fan--found difficult to read.

This fictional take two was more successful, and it incorporated a lot of ideas I had wanted to express in writing. On my birthday (August 10), I learned that Joyland co-founder Emily Schultz wanted to publish the piece, and on October 26, it happened. I have received many nice comments about the story, especially from musicians.

When you read the story, I recommend listening to the Chaconne at the same time. Below is a recording of it by violinist Hilary Hahn.

Fun facts: After my last violin recital in Maine, before moving to Kentucky, my teacher, Arnold Liver, gave me a Hilary Hahn recording of solo Bach.

During what I think was a subsequent summer, when I was at chamber-music camp in Vermont, we campers saw and heard Hilary Hahn perform a concert, including the Chaconne, at Middlebury College, where Hahn was participating in a French-immersion program. One of the younger campers went up to her and said hello in French. We had been warned that she couldn't speak English to us because of her program's rules. I did not say bonjour, but I did think it was awesome to see Hilary Hahn. Was one of the pieces called "Le Crépuscule"? I remember being proud to know what that word meant.

So many great words for that time of day, dusk. But that's another story.


Posted by Katie Crenshaw at 11:59 AM No comments: