Etymological Adventures: On Scrolls and Scrolling 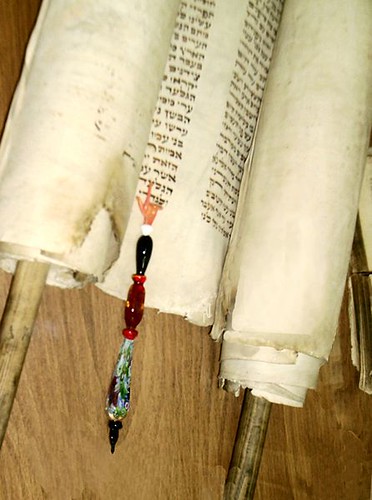 "Yad and Sefer Torah" by Rachel-Esther is licensed under CC BY-SA 2.0
When you scroll on your phone, what do you imagine happens to the text—or Tweets or photos—you can’t see? I imagine the material on the screen continuing straight up, forever. But the verb ‘to scroll’ suggests something else—that our Instagram and Facebook feeds are rolling up behind the tops of our phone screens once they slip out of sight and are at the same time unrolling before our eyes from an invisible reel at the bottom. It’s as if behind-the-scenes work, akin to the little people who live inside the television, is unfolding at the edges of our phones.
Scroll is my word for the week. It’s on my mind because the Jewish holiday of Purim is this Thursday, and it's a Purim tradition for the Scroll of Esther—a.k.a. Megillat Esther a.k.a. ‘the megillah’—to be read aloud in synagogues. The Scroll of Esther, or Book of Esther, is one of the Kethuvim (Writings) and is within the non-Torah part of the Jewish Bible. It tells the story of how Jews in Persia escaped extermination by Haman, the king’s angry advisor (and namesake of hamantaschen cookies), thanks to the titular Queen Esther.
I am a non-Jew learning about Judaism, and this will be my first time celebrating Purim. There are lots of things I don’t know about the holiday, such as whether the megillah is actually a separate physical scroll or whether it’s connected to other writings the way the five books of the Torah are all written on one scroll. I also don’t know how long it takes to read ‘the whole megillah’ (Purim is where that expression comes from). But what I have learned and can report here is that the word megillah means scroll in Hebrew.
The Hebrew root of megillah means ‘to roll,’ according to Wiktionary, which in turn cites the biblical lexicon Strong’s Concordance. This seems quite appropriate for a scroll, a document through which you move by rolling up the part you’ve just read and unrolling what’s to come. So it is for the English word scroll, which has ‘roll’ contained within it. The origins of the English word—from Old French escroe, “scrap, roll of parchment,” according to the Online Etymological Dictionary—are not particularly enlightening, except for this one tidbit: “Sense of ‘show a few lines at a time" (on a computer or TV screen) first recorded 1981.’” 1981!—the year the first IBM personal computer came out, according to this Live Science article, but decades before the iPhone.
Before I ever attended a Torah service, which is something I’ve only ever done online, I imagined a scroll as something a courtly figure would unroll vertically, like a roll of toilet paper, and that if the document were too long, the end would drag on the ground. I was surprised, then, to learn that a Torah scroll has two rollers, one at each end, and that what you’re reading is between them. You don’t read down a Torah scroll the way I’d imagined a courtier reading a scroll from top to bottom (or the way you read your phone). To be more precise, you don’t read the Torah scroll in the direction of its scrolling. Instead, you read in columns across it, columns perpendicular to the way it rolls and unrolls. 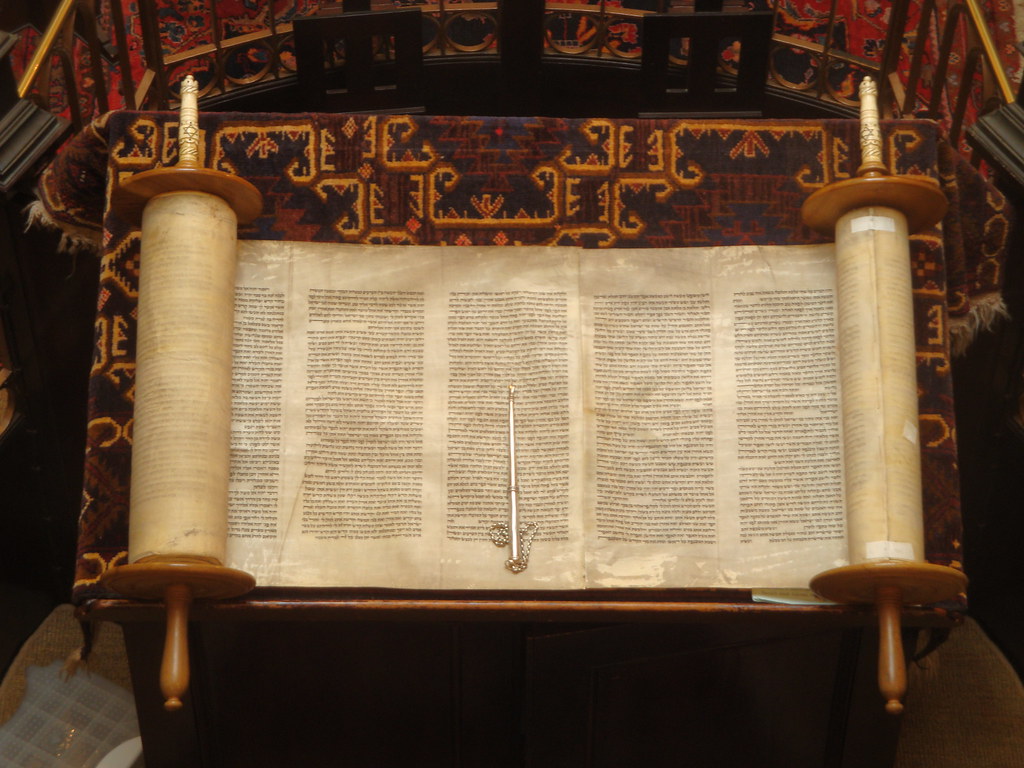 "Torah" by Lawrie Cate is licensed under CC BY 2.0
Like on a phone, though, the viewing area of a Torah scroll is always roughly the same size, limited, I guess, by the size of the bimah, the platform from which it is read in the synagogue. Another similarity between reading a Torah scroll and scrolling on a phone is the role of the finger. On the phone, you flick the feed along with your index finger. You keep your place on a Torah scroll with a miniature hand on a stick, called a yad, which has its own miniature pointer finger extended. 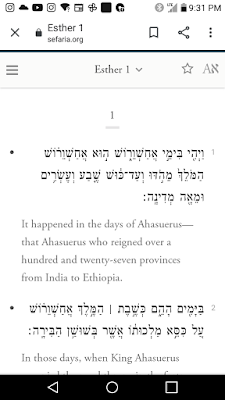 Of course you can read the Torah, or the Book of Esther, on your phone. In that case, then, the verb ‘scroll’ is particularly appropriate. 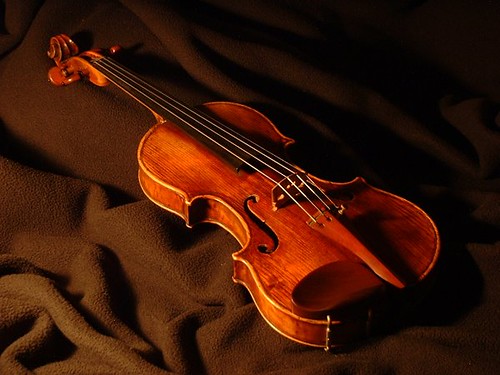 "Violin" by pellaea is licensed under CC BY 2.0
It occurred to me as I searched for photos to accompany this blog post that not all scrolls have anything to do with reading, or even looking at photos. I may be learning about Judaism, but perhaps I'm forgetting about the violin, something to which I am not new at all and something that, as the Creative Commons image search tool reminded me when I typed in 'scroll', also has one. You can't roll or unroll it. It's carved in the wood. It's within the scroll, however, that the instrument's strings are wound and unwound in the process of tuning. A balance is reached between the strings; they have concordances between them. Tuning is something delicate and important, a sacred scrolling.
Posted by Katie Crenshaw at 10:23 AM No comments:

This week, I was writing an article about a shoe designed to be easy to put on and take off. Ah, the frustration of writing that phrase, to put on and take off. I wanted to shorten it: put on and off, take on and off. But you don't 'put off' or 'take on' your shoes unless you're in some sort of argument or fight, with your footwear. What I really wanted to write was that this shoe is 'easy to doff and don.' But some readers might not understand me if I wrote that, and I wasn't willing to sacrifice clarity for brevity (if making the piece two words shorter can be considered real progress toward brevity). So let's go on and on about doff and don in a separate article!

Doff and don do indeed mean to take off and to put on, respectively. They are contractions of 'do off' and 'do on,' according to Chambers Etymological Dictionary. 'Do' once had the meaning 'to put or place,' it seems. The Shorter O lists 'put or place' as the first meaning of 'do.' It then goes on to say that this meaning is "obs. exc. dial., with preps. (see do off etc. below)." I think the Shorter O would do well to pay a bit more attention to clarity, here. Expanding the abbreviations, the Shorter O is saying that the put or place meaning of do is obsolete except for dialect-related uses with prepositions. Prepositions such as off and on!

It turns out that 'dup' is already a word, albeit an archaic one. This contraction of 'do up' means to open, according to the Shorter O. Let's see that squirrel try to dup the tree. Dover is also a word. According to the Shorter O, to dover means to "doze or be unconscious" or to cause to doze or be unconscious. Or to "wander aimlessly or confusedly; walk unsteadily." Dover can also mean, as a noun, "a light or fitful sleep; a doze," according to the Shorter O. Dover's powder, the next entry in the Shorter O, is "a mixture of opium and ipecacuanha." You might think it would be used to dover people, that is, put them to sleep, especially given the opium content, but no. It was named after physician Thomas Dover. According to the definition in the Shorter O, Dover's powder was used to ease pain. Or induce sweating. I don't think the tree will be in need of dovering from the squirrel. For now, I will give the squirrel a break and sign off.

Posted by Katie Crenshaw at 10:57 AM No comments:

Etymological Adventures: Biblio- and Beyond 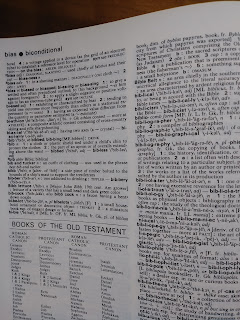 Bibliophile. Bibliography. Of all word roots, I'd say that biblio-, meaning book, is one of the most basic, for me, anyway. I feel like I've known what it meant for a long time. Why, then, did it take 36 years for me to notice that the word Bible might potentially have the very same root? That's not an interesting question, but the connection between Bible and biblio, on the other hand, is very cool.

Yes, these words all have the same root. Merriam-Webster gives me a game-of-telephone-like history of the word bible (Middle English from Old French from Medieval Latin from Greek) that goes all the way back to the Greek byblos, meaning papyrus, or book. Byblos, in turn, was the name of an ancient city that exported papyrus.

When the connection between Bible and biblio hit me, it reminded me of something I read in The Broken Estate: Essays on Literature and Belief, by literary critic James Wood. Wood describes the belief, indeed still held by many people, that the Bible was a God-given account of the history of the world, the absolute truth. He calls this idea the old estate, and in his book, particularly in the introductory essay "The Freedom of Not Quite" and in the title essay, Wood describes how novels broke the old estate, or cracked it, anyway. When the Bible was considered truth, it perhaps didn't occur to people that books could be anything other than true. Novels, Wood says--and particularly novels about religious figures--changed that. All of a sudden there were these books that felt as true or truer than the Bible, yet they were entirely made up by ordinary people. Was the Bible made up, too? The existence of novels made people wonder.

It's as if, it seems to me, book originally meant the word of God as recorded by prophets. Maybe, at one time, book was a sufficient description for a religion's foundational, even holy, text. Once regular people started writing books that were patently fictional, it became necessary to find words to distinguish The Book from others. At the same time, as Wood points out in "The Freedom of Not Quite," many people also had and still have reverence for fiction, further complicating the task of distinguishing what's holy and what's not. "At the high point of the novel's rise, the Gospels began to be read, by both writers and theologians, as a set of fictional tales--as a kind of novel. Simultaneously, fiction became an almost religious activity (though not of course with religion's former truth-value, for this was no longer quite believed in)," Wood writes.

Other books do have other names: novel, memoir, stories, essays. Nonfiction is defined relative to fiction, almost as if fiction is the default. We don't have, for example, books categorized as truth and untruth. Yet the Bible, if you think about its derivation, is still basically called The Book.

PS: Chambers Etymological Dictionary says that in addition to book, the root biblio- can refer to the Bible, "as in bibliolatry = excessive reverence for the Bible." So there you go.

Posted by Katie Crenshaw at 11:04 AM No comments: