On Tsuris: A Rock Or a Hard Place? 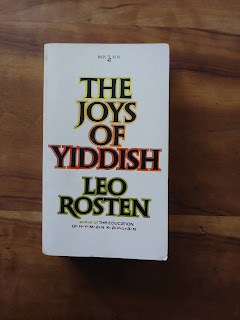 This summer, interested in Judaism but not quite sure where to go for information, I read Leo Rosten's The Joys of Yiddish (1968), a paperback I'd long admired in my parents' glass-fronted bookcase. There I encountered the word 'tsuris,' which means "troubles, woes, worries, suffering," according to Rosten. 'Having tsuris' is something to be avoided or bemoaned. The word 'tsuris' comes from the Hebrew 'tsarah,' (feminine), which means trouble, Rosten wrote. Perhaps the old paperback predicted the etymological predicaments I would later throw myself into, where sense and relatedness appealed but irony was what fascinated. Or not.

In any case, fast forward a few months and I was sounding out Psalm 95 on Sefaria.org.

"L'chu n'ran'na, Adonai, nariah l'tzur yisheinu," went the transliteration [boldface my own]. "Raise a shout . . . Adonai . . . trouble . . ." I thought. "Wait, trouble?" But no, according to the translation, it's "raise a shout for our rock and deliverer." It's just that the 'rock and deliverer' part,' 'l'tzur yisheinu' (לְצ֣וּר יִשְׁעֵֽנוּ), sounded (or looked, since I was reading) like 'tsuris.' It turns out that 'tsur' or 'tzur' (צ֣וּר) is a masculine Hebrew noun meaning 'rock or cliff,' according to Strong's Concordance. Rock means support, here. Nothing to do with trouble; nothing to see.
Some days later, though, I learned that the Hebrew word for Egypt, Mitzrayim (מִצְרַ֖יִם), can mean 'straits,' or 'narrow place' and also, figuratively, troubles. Which makes sense, given that according to the story of Exodus, the Israelites were enslaved in Egypt. I can't let go of my feeling that there has to be a connection between 'tsur' as rock on one hand and 'tsuris,' straits, and 'Mitzrayim' on the other and that this line of thinking is going to cause, well—
It makes a kind of sense. When I imagine a strait, I see a person in a boat between two rock faces, trying or hoping not to bash into either one. I think of being 'between a rock and a hard place.' Maybe God is the rock and straits are the hard place. Or is one rock support while two are 'tsuris'?
There's an easy way to explain that God is not trouble, etymologically speaking. 'Tsarah,' the Hebrew root of 'tsuris,' is a feminine noun derived from the adjective 'tsar.' The Hebrew word for rock or cliff, on the other hand, is masculine. So they aren't the same. As for whether they could still be somehow related, that's beyond me. (Let's not even get started on the idea that trouble is female.) But what interests me are the implications of the idea that the words for 'rock,' referring to God, and 'troubles' are alike in some way, even if it only seems like that.
I thought the psalm was calling God trouble when in fact it praises God for supporting people and delivering them from their troubles (chief among them enslavement in Egypt). The mistake asks, "Could God be both trouble and the one who gets you out of it?" The question points to theodicy, or efforts to reconcile the terrible things that happen in the world with the idea that God is all powerful, all knowing, and all good.
I like that there's a word for it, theodicy, a word that manages to encompass the problem of evil and efforts to solve it. It's much easier to dismiss religion when you think religious people just don't notice contradictions like the idea of an all-powerful God presiding over a world where horrible things happen. The fact that there's a term for the problem suggests that it has not been ignored as indeed it hasn't. As part of the process of converting to Judaism, I recently read a book (Rifat Sonsino and Daniel B. Syme, Finding God: Selected Responses, 2002 edition) that presents diverse Jewish perspectives on God from thinkers like Maimonides, Spinoza, and Mordecai Kaplan, and every single one addresses the problem of evil. These Jewish thinkers have obviously given the issue more consideration than I did, growing up in an atheist family where not believing, and not thinking about it, was the de facto solution.
I think 'tsuris' could be just another 'word for it.' It's a term that embodies a contradiction, a rock and a hard place, support and trouble, a narrows and also a way out.
Posted by Katie Crenshaw at 10:41 AM